The logo of Chicago Union Station is not considered a "work of authorship" because it only consists of text in a simple typeface, so it is not an object of copyright in respect to US law. However, this logo is still protected by trademark laws.
Поріг оригінальності
Африка Америка Азія Європа Океанія Others

The threshold of originality is a concept in copyright law that is used to assess whether or not a particular work, or a portion of it, can be copyrighted. It is used to distinguish works that are sufficiently original to warrant copyright protection from those that are not. In this context, "originality" refers to "coming from someone as the originator/author" (insofar as it somehow reflects the author's personality), rather than "never having occurred or existed before" (which would amount to the protection of something new, as in patent protection).

As a rule, copyright applies to a work as a whole. If a work contains a portion that is complex enough to receive copyright protection, then the whole work is considered to be copyrighted. One cannot upload said work to Commons by applying de minimis to the non-trivial portion.

The remainder of this page discusses images judged ineligible for copyright protection by a court or similar authority. It's usually unable to determine whether a specific image is within the threshold of originality without a judicial decision. However, per precautionary principle, the image should be deleted if there's significant doubt that the image is not copyrighted.

For further information, see Threshold of originality on Wikipedia. 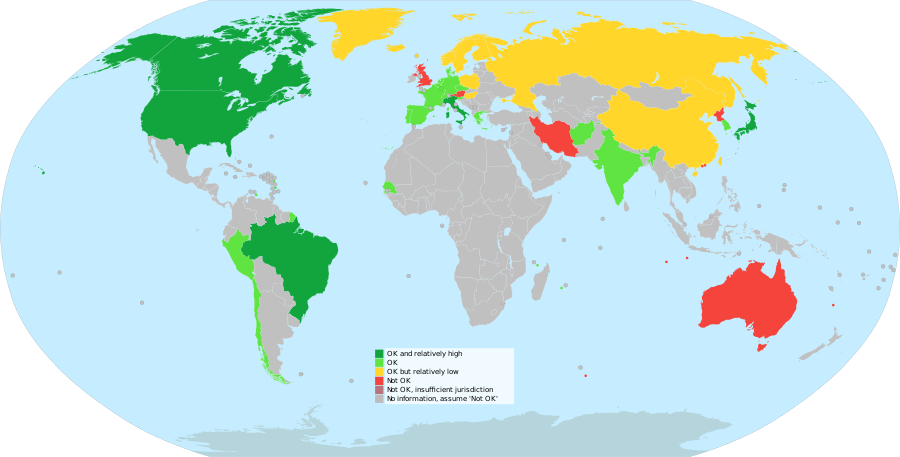 Civil law countries usually require a relatively high minimum level of intellectual creativity which will exclude typical signatures and simple logos from copyright protection. However, this does not apply to all such countries. For example, Austria and China are both known to have a relatively low threshold of originality.

If you are aware of specific case law or legal advice on this issue in any country, please add a "Threshold of originality" section to the appropriate Commons:Copyright rules by territory country subpage, and add a link to it with an entry below.

Common law countries typically use a "skill and labour" test to determine the minimum level of originality capable of attracting copyright protection. The required level is extremely low in some countries such as Australia and the United Kingdom. However, Canada and India are major two exceptions. Without some research into individual laws, it cannot be assumed that a text logo from a Common law country is necessarily allowed on Commons. If there is real doubt about the position a local court would take, then the image must be deleted under the precautionary principle.

If the logo is extremely simple (e.g. in a standard font), it will not be eligible for copyright even in Common law countries.

If you are aware of specific case law or legal advice on this issue in any country, please add a "Threshold of originality" section to the appropriate Commons:Copyright rules by territory country subpage, and add a link to it with an entry below.

Images which have been kept because of lack of originality or de minimis:

Note that some of these decisions were controversial.

Photographs which have been deemed ineligible for copyright protection:

Maps which have been deemed ineligible for copyright protection:

Darden v. Peters: the addition of "font and color selection; visual effects such as relief, shadowing, and shading; labeling; call-outs" and anti-aliasing to a preexisting map is below the threshold of originality

Use: {{PD-map}}. See the section farther down on partial copying or cropping of uncopyrightable elements from copyrighted works.

Charts which have been deemed ineligible for copyright protection. Use: {{PD-chart}}. See the section farther down on partial copying or cropping of uncopyrightable elements from copyrighted works. See also:

For more complete, working references see Commons:Copyright rules by territory and the individual countries and territories: